Posted at 10:45h in Colocation And Hosting Blog: Netrepid by netrepidadmin
Share

Over the last two weeks, I’ve been spending a lot of time reviewing the advertising and strategy behind it in the hosting industry.

Then, I learned Hulk Hogan is getting into the hosting game. Then, I saw the web commercial for his new web hosting platform…. then I saw him in a thong and thought to myself – has it really come to this?

However, after taking a look back at five ad campaigns from leading (and not so leading) website hosting providers, I realized the industry hasn’t just gotten to this point today – web hosting companies at large have been doing bad ad campaings for years.

Below are five ad campaigns that can best be described as “awesomely awful” from the web hosting industry. Hope you get a laugh, a shake of the head, and some inspiration to help me find some others by leaving a comment below with your favorite.

For those who don’t remember, Dustin Diamond played Screech on ‘Saved By The Bell’ in the 90s. In 2006, he was hired by Globat.com – a provider of “web hosting made easy” – to be the spokesperson for the company as they prepared to launch their hosting packages TeraByte Pro and TeraByte Commerce. At the time, the CEO of Globat was quoted as saying his quirkiness and technical abilities made him “the perfect person to introduce these packages and show people the fun side of Web hosting.”

Less than three weeks later, a sex tape featuring Diamond was released, and Globat got concerned. Funny enough, one of the ads they put together featuring Diamond included tag lines like “our nerds do it best and go all night long!” and “our nerds have the biggest packages!”

While I’m not sure how long the campaign with Screech lasted, I can’t imagine the execs at Globat look back on this campaign as as shining moment for the company – even if working with Diamond made them famous.

If you’re going to start a list of advertising campaigns and include website hosts, you’ve got to include GoDaddy. Hard to believe we’ve been seeing their Super Bowl ads for 12 years now. However, I do believe their 2013 ad for the Big Game was one of the worst that they’ve done.

This critique isn’t really fair to GoDaddy – I mean, the ad DOES star swimsuit model Bar Refaeli – but the sounds of the kiss between her and Walter can only be hashtagged as #creepy, #gross, and #awful.

Regardless of how you feel about the sounds of kissing, GoDaddy received quite a lot of attention for the ad, and to date it has generated over 11-million views.

I still would catalog the sounds as awful though.

You will be hard pressed to find a bigger fan of Hulk Hogan in the technology sphere than me. But seeing the image of the Hulkster rocking a thong in this video has haunted my dreams since I first saw this clip earlier this month.

The clip from Hogan’s new web hosting venture – Hostamania – parodies the “It’s Go Time!” campaign from GoDaddy and the music video for Miley Cyrus’s ‘Wrecking Ball’ in a mere 1:02.

Time will tell if Hostamania actually does run wild on the industry – but I’d be more than happy for their commercial to erase itself from my memory. 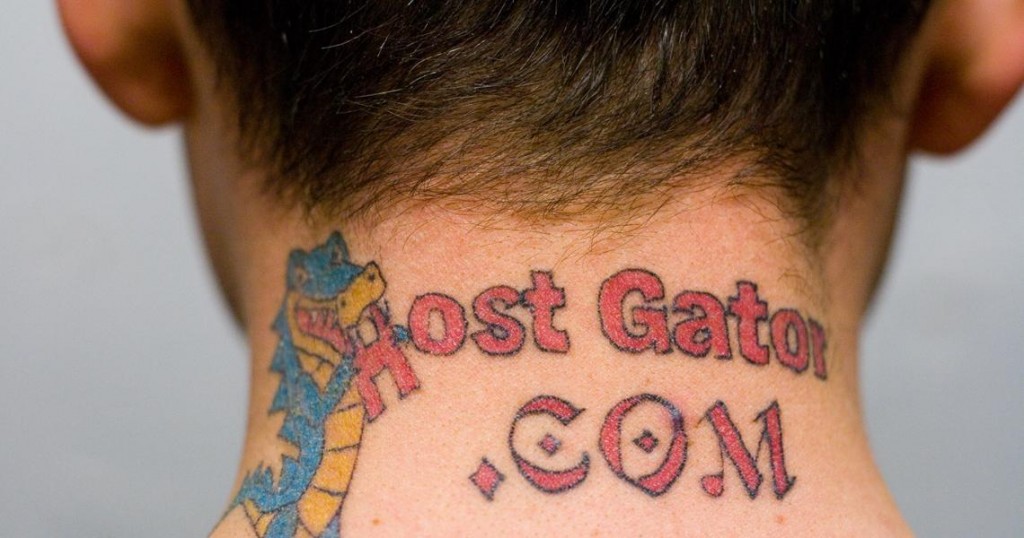 I’m willing to bet HostGator.com wishes people would forget about this publicity stunt from back in 2009. About four years ago, the web hosting provider paid Billy ‘The Human Billboard” $3000 to tattoo their business name and logo onto his neck.

The crazy part? He accepted. Or is it? Because later that year, Billy Gibby officially changed his name to “Hostgat or Dotcom.”

You read that right.

Since initially getting into the “tattoo advertising” space back in ’09, HostGator has failed to conduct future campaigns in the medium. I suspect they learned their lesson with Billy.

As a professional SEO and internet marketer, I’ve written my fair share of “optimized content” and utilized keywords through meta tagging to improve visibility of websites. So I know what it sounds like when copywriters stuff keywords into content. Chances are you’ve probably read many an ad or page of content on the web, yourself.

The commercial above from RackSpace is similar to keyword stuffing in composition. Listen to the actor read the script:

… and all of that was just the first 30 seconds!

I totally understand that commercials have a lack of time to get a message out, and that RackSpace was probably trying to reach a broad group of people who may or may not have known a lot about their technology. After all, this was the early 2000’s.

At the end of it all, the awfulness of this ad comes back to the script. I definitely appreciate what RackSpace has become in the last decade since launching this ad – but luckily for them, they decided to shy away from this marketing format.

Are there any ad campaigns from the tech world you can remember that you absolutely despised? Please share them in the comments below!