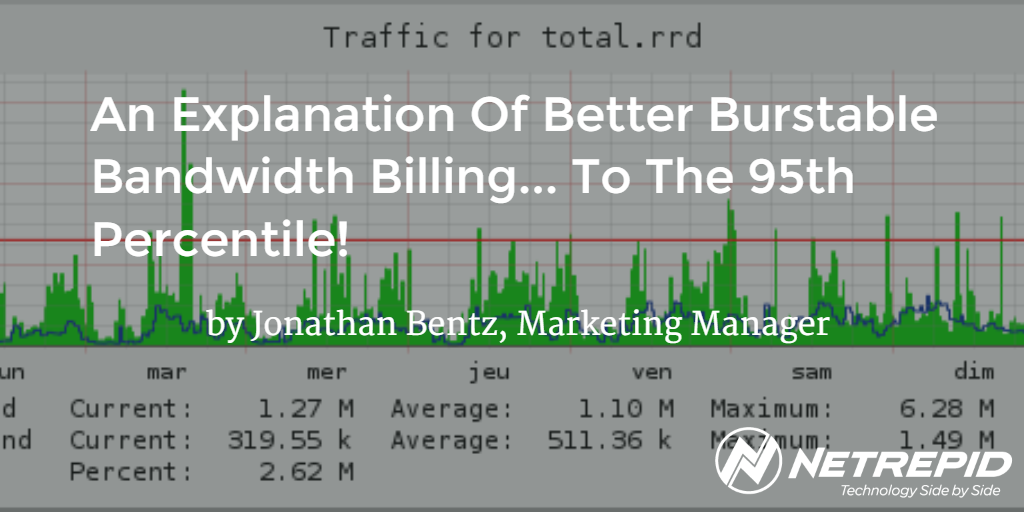 Posted at 19:00h in Colocation And Hosting Blog: Netrepid by netrepidadmin
Share

Over the last several weeks, our executive team has been working diligently to find a better way to provide transparent pricing for our signature data center service – colocation. Trust me, this has not been the easiest task. Why? Well…

When data centers provide true colocation – and not simply dedicated hosting rentals of their own servers – there are a lot of variables. Company A might need more bandwidth than Company B even though they require the same amount of rackspace. Company B’s servers may require more IPs and need a greater power supply than Company A, and so on.

Arguably, the variable with the widest range of possibilities is bandwidth. Because of that, Netrepid applies the calculation of burstable billing to its bandwidth pricing, based on the 95th percentile of actual usage.

If you want to be brought up to speed on burstable bandwidth billing, an explanation, example, and sample calculation are included below.

Your CFO Wants To $ave On Hosting?

What Is 95th Percentile Billing?

to pay each month for a pre-determined amount of internet bandwidth – and at certain times even EXCEED that bandwidth – without having to pay associated overage fees for the bandwidth spike beyond their contracted usage.

Sounds great, right? Doesn’t part of you wish your cell phone provider would do the same thing? I kinda do!

At Netrepid, we deploy the practice of 95th percentile billing to our burstable bandwidth pricing for all colocation tenets in our data center.

A visual example of what you pay for - and what you don't pay for - when your hosting provider calculates 95th percentile billing of your burstable bandwidth.

Want To See How Much Colocation Costs?

Review Our Colocation Prices Before You Submit Your RFQ.

Want to see an example of how burstable billing works? Great! First, let’s establish that there are three types of internet connections for tenets in a data center. They are:

A sample report of Bandwidth measurements recorded in a log file. (Source: Wikipedia)

At the end of that 30-day cycle, each of the samples are sorted from highest to lowest. When you apply the rules of 95th percentile burstable billing to this log file, the top 5% of logs are immediately removed from the file before determining a billable MBPS. The next highest measurement AFTER that top 5% then becomes the burstable billing usage on that server for the entire month.

Consider the following, based on the above sample bandwidth report:

How We Do Our 95th Percentile Burstable Billing Calculations At Netrepid

In the interest of doing a price calculation comparison, let’s now set the following rates for the above mentioned internet connections:

In this example, let’s also establish that the user had a dedicated connection of 1MBPS and 95th Percentile Burstable bandwidth for usage above that.

Based on pricing alone, it may seem like fixed burstable is the way to go. After all, the savings per MB over dedicated (60%) and 95th percentile (67%) appear to be substantial.

Let’s do the math though.

If the user in the example above had selected to just fix rate his burstable bandwidth with a 10MB port instead of going burstable, his rate for the billing period would have been:

By comparison, if the user had chosen to combine dedicated AND 95th percentile burstable, his rate for the billing period would have been:

And the user would have saved 28% on his monthly bandwidth charges.

There are many benefits to choosing a third-party data center facility for your colocation, but there are a lot of financial considerations to make before selecting your provider. Bandwidth availability and pricing varies across the globe, and often times that happens because of the different ways colocation providers bill their bandwidth usage.

Data centers that adopt a burstable billing methodology for calculating bandwidth costs present their customers with the ability to pay per MB for bandwidth they regularly use – while still having the ability to accelerate their usage when necessary. While the rates are often higher for 95th percentile burstable over fixed burstable, companies are more likely to find savings each month by embracing this ‘pay as you go’ opportunity over purchasing a larger volume of fixed bandwidth they will never use.

Have more questions about burstable billing? Let us know in the comments below!

Want To See How Much Colocation Costs?

Review Our Colocation Prices Before You Submit Your RFQ.

Do You Have More Questions About 95th Percentile Burstable Bandwidth Billing?