A Conversation With Sam Coyl – From Central Penn Business Journal

Posted at 04:02h in Colocation And Hosting Blog: Netrepid by netrepidadmin
Share

Editor’s Note: This interview was originally published in the Central Penn Business Journal in November 2013. 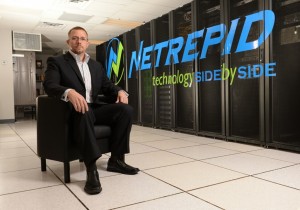 Q: What unique or unusual services are offered by Netrepid?

A: Our most unique element is the fact that we combine virtual cloud and traditional IT services. Most of the companies out there specialize in one or the other. But, because of our backgrounds and the level of IT knowledge we have to have to run the data center, we are able to provide clients with more of a hybrid solution rather than all or nothing.

How does Netrepid stay on the cutting edge of innovations?

We actually talk about that constantly. We have to have current training and current certifications, so everyone on our team has an outlined training path for professional development, whether it’s Microsoft, Citrix, ITIL or any of those paths, depending what their role is in the company. Everyone has a training path and expectation they’re going to pass certain certification tests.

For instance, our IT team, the engineers who work on all this, have the expectation they can pass at least one major test every quarter, which is aggressive, but our team is able to pull it off. That helps us keep up-to-date with what the current technologies are, the current trends.

Our partnerships with the manufacturers also allow us to have access to software and solutions much sooner than the general public.

What are the most common requests you are hearing from clients right now?

One of the big advantages from a sales perspective is everyone needs IT. In some form or fashion, you need a server, you need email, you need a website. There are certain things you need regardless what type of industry you are in or the size of your company.

We’ve found that certain geographies are adopting certain technology differently. For instance, Baltimore, D.C. and even parts of New York are really using a lot of the hosted-desktop solutions, so a virtual desktop instead of having all your software loaded on your machine.

In Central Pennsylvania, a lot of the technology around here is in stagnant form because people weren’t sure where the economy was going, weren’t sure whether business growth was going to occur. Now, they’re at a point where a lot of those companies have to upgrade. Those upgrades are more basic, like going to a hosted-exchange environment. A lot of them are looking at rolling out SharePoint for collaboration. A lot of them are moving their infrastructures that might be older and ready to upgrade in their facilities, (and) rather than spending five or six figures in capital expense to upgrade all that, they are looking at moving them to more virtual cloud in our data center environment.

What have been the biggest changes in information technology in the last five years?

Honestly, the server technology has advanced so much … that we’re kind of going full circle back to the same client concept — the giant mainframe server and green screen that (typified) the ’80s and early ’90s.

We had a shift where all the processing moved out to the PCs because people wanted more processing power at their fingertips. Now, it’s moving back to the concept where you put everything back at a giant server farm.

With virtualization, (you are) able to dynamically move servers back and forth between hardware and between locations (and are able) to have applications published in a cloud format so that they look the same regardless of what type of platform you’re on. All that has led us to where we are, where people are starting to say, “It’s time to move our hardware out of our offices and into the cloud. It’s time to really start looking at a viable option to keep our infrastructure moving.”

What new technologies are on the horizon? What will the nation’s technological future look like?

More and more of the technology is being integrated. For instance, Microsoft’s new platform of servers — the server, 2012 Exchange, SharePoint and Lync 2013 — all of those services have done a great job of bundling within the business applications into an integrated environment. Instead of having to open 10 applications to do something, you can start a chat session with someone you’re emailing, you can share documents, you can do all those things from one interface at the user level.

People are able to be a lot more efficient with what they’re doing and what they’re using it for as an organization.

What we’re seeing is that because of that, companies are able to distribute themselves a little bit more effectively, especially if they have a large geography to cover with multiple offices or remote workers. That coupled with the higher bandwidth available through cellular technologies has made a larger, more geographic workforce more effective.

Sam Coyl joined the U.S. Marine Corps when living in Detroit. In the military, he did research and development for tactical communications systems such as Wi-Fi and ASC11. He worked in the Silicon Valley before bringing his knowledge and entrepreneurial spirit to Central Pennsylvania, where his business, Netrepid, was formed in 2004.

Coyl lives in East Pennsboro Township with his wife of 16 years, Jennifer. They have two daughters who are busy with activities such as cello lessons, golf, soccer and swimming. He enjoys golfing and shooting targets in his spare time.