Posted at 15:58h in Colocation And Hosting Blog: Netrepid by netrepidadmin
Share 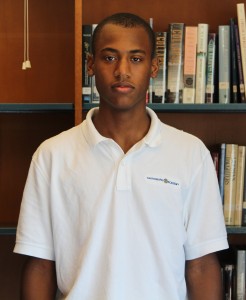 Jini Gabbidon, an intern at Netrepid and a senior at the Harrisburg Academy, has been named a 2015 recipient of a National Achievement® $2,500 Scholarship award. Gabbidon has been offered and chose to accept the college-sponsored scholarship to Massachusetts Institute of Technology, where he will attend in the spring. The National Achievement Scholarship Program honors individual Black American high school students who excel in academics.

Keo Oura Kounlavong-Sabath, director of college counseling, said, “Congratulations to Jini on receiving a National Achievement Scholarship. Having shown excellence in academics, athletics, and leadership during his time at the Academy, Jini is now even better prepared to continue fostering these qualities at MIT.”

Gabbidon, who has attended Harrisburg Academy since 1st grade, is an International Baccalaureate Diploma candidate and was a member of the Academy’s BrainBusters and Quiz Bowl teams. He has also participated in Academic WorldQuest and Science Olympiad competitions with Academy teams. Intending to study computer science in college, Gabbidon has been involved in technology programs while at the Academy, including serving as a summer technology intern for two years. In addition, he will participate in Google’s prestigious Computer Science Summer Institute hosted at MIT during the summer of 2015.

Also a talented student-athlete at the Academy, Gabbidon has been a member of the Varsity Boys’ Basketball team for four years, serving as co-captain his senior year. He is an Academy Top 10 All-Time Career Scorer and a Top 5 All-Time Career Rebounder.

Gabbidon joined the Netrepid team earlier this month to complete his senior internship. Over the past few weeks, he has been working with our team to build internal applications that will enable our lean, agile staff to improve the efficiency with which we complete our customer support processes.

About the National Achievement Scholarship Program

Established in 1784, Harrisburg Academy is the 17th oldest non-public school in the nation and Harrisburg’s only independent school. Our coed, diverse school community inspires students from age three through 12th grade by providing an academically challenging and globally minded liberal arts education focused on dynamic classroom experiences, strong student outcomes, and a commitment to character development. The Academy proudly stands as the first school in the greater Harrisburg area to offer the International Baccalaureate Diploma Program and merit scholarship.